column
Review Article
From human genome epidemiology to systems epidemiology: current progress and future perspective
Hongxia Ma, Hongbing Shen
2020, 34(5): 323-327. doi: 10.7555/JBR.34.20200027
+ Abstract + HTML + PDF 877KB [Cited by]
The recent progress in human genome epidemiology (HuGE) is already having a profound impact on the practice of medicine and public health. First, the success of genome-wide association studies has greatly expanded the direction and content of epidemiological researches, including revealing new genetic mechanisms of complex diseases, identifying new targets for therapeutic interventions, and improving application in early screening of high-risk populations. At the same time, large-scale genomic studies make it possible to efficiently explore the gene-environment interactions, which will help better understand the biological pathways of complex diseases and identify individuals who may be more susceptible to diseases. Additionally, the emergence of systems epidemiology aims to integrate multi-omics together with epidemiological data to create a systems network that can comprehensively characterize the diverse range of factors contributing to disease development. These progress will help to apply HuGE findings into practice to improve the health of individuals and populations.

TIR/BB-loop mimetic AS-1 protects vascular endothelial cells from injury induced by hypoxia/reoxygenation
Zhijia Zhang, Yuxing Hou, Jiantao Li, Chao Tang, Linli Que, Qian Tan, Yuehua Li
2020, 34(5): 343-350. doi: 10.7555/JBR.33.20190030
+ Abstract + HTML + PDF 1547KB [Cited by]
Morphological and functional abnormalities of vascular endothelial cells (VECs) are risk factors of ischemia-reperfusion in skin flaps. Signaling pathway mediated by interleukin-1 receptor (IL-1R) is essential to hypoxia/reoxygenation (H/R) injury of VECs. While the TIR/BB-loop mimetic (AS-1) disrupts the interaction between IL-1R and myeloid differentiation primary-response protein 88 (MyD88), its role in the VECs dysfunction under H/R is unclear. In this study, we first showed that there was an infiltration of inflammatory cells and the apoptosis of VECs by using a skin flap section from patients who received flap transplantation. We then showed that the H/R treatment induced apoptosis and loss of cell migration of endothelial cell line H926 were attenuated by AS-1. Furthermore, our data suggested that AS-1 inhibits the interaction between IL-1R and MyD88, and subsequent phosphorylation of IκB and p38 pathway, as well as the nuclear localization of NF-KB subunit p65/p50. Thus, this study indicated that the protective role of AS-1 in H/R induced cellular injury may be due to the AS-1 mediated down-regulation of IL-1R signaling pathway.

Cofilin participates in regulating alpha-epithelial sodium channel by interaction with 14-3-3 isoforms
Ashfaq-Ahmad-Shah Bukhari, Xue Zhang, Min Li, Anran Zhao, Hao Dong, Xiubin Liang
2020, 34(5): 351-360. doi: 10.7555/JBR.34.20190155
+ Abstract + HTML + PDF 1409KB [Cited by]
Renal epithelial sodium channel (ENaC) plays a crucial role in maintaining homeostasis and sodium absorption. While insulin participates in controlling sodium transport across the renal epithelium, the underlying molecular mechanism remain unclear. In this study, we found that insulin increased the expression and function of alpha-epithelial sodium channel (α-ENaC) as well as phosphorylation of cofilin, a family of actin-binding proteins which disassembles actin filaments, in mouse cortical collecting duct (mpkCCDc14) cells. The wild-type (WT) cofilin and its constitutively phosphorylated form (S3D), but not its constitutively non-phosphorylable form (S3A), contributed to the elevated expression on α-ENaC. Overexpression of 14-3-3ε, β, or γ increased the expression of α-ENaC and cofilin phosphorylation, which was blunted by knockdown of 14-3-3ε, β, or γ. Moreover, it was found that insulin increased the interaction between cofilin and 14-3-3 isoforms, which indicated relevance of 14-3-3 isoforms with cofilin. Furthermore, LIMK1/SSH1 pathway was involved in regulation of cofilin and α-ENaC expression by insulin. The results from this work indicate that cofilin participates in the regulation of α-ENaC by interaction with 14-3-3 isoforms.

Cumulative live birth rates of in vitro fertilization/intracytoplasmic sperm injection after multiple complete cycles in China
Lei Huang, Qun Lu, Jiangbo Du, Hong Lv, Shiyao Tao, Shiyao Chen, Xiuzhu Li, Xiumei Han, Kun Zhou, Bo Xu, Xiaoyu Liu, Hongxia Ma, Yankai Xia, Guangfu Jin, Hongbing Shen, Xiufeng Ling, Zhibin Hu, Jichun Tan, Feiyang Diao
2020, 34(5): 361-368. doi: 10.7555/JBR.34.20200035
+ Abstract + HTML + PDF 1252KB [Cited by]
There were few studies of cumulative live birth rates (CLBRs) based on multicenter reproductive clinical data from the general Chinese population. Here we report a retrospective cohort study, including 14 311 women with 17 315 cycles, in three reproductive centers to evaluate two estimated parameters of CLBRs with multiple transfer cycles of in vitro fertilization (IVF)/intracytoplasmic sperm injection (ICSI) in a Chinese population. We found that CLBRs were related to female age and endometrial thickness. By the fourth transfer cycle, the conservative and optimal estimates of CLBRs were 52.95% and 77.30% in women under 30 years of age, and 18.17% and 26.51% in those 37 years of age or older, respectively. The two estimates were 44.70% and 63.15% in women with endometrial thickness more than 7 mm, and 32.05% and 46.18% in those with less than 7 mm, respectively. In addition, body mass index (BMI), duration of infertility, and infertility diagnoses may also be related to CLBRs on certain conditions. The findings from this study on CLBRs after multiple transfer cycles of IVF/ICSI treatment on different conditions in the Chinese population should be beneficial to both infertile couples and clinicians.

With the increasing immunological studies on camels due to the advantage of their single-chain antibodies for humanizations, it is demanding to develop an easy-to-handle evaluation method of their humoral immune response before proceeding with immunization of foreign antigens that may be toxic to camels. In this study, we quantitatively determined the expression levels of T-helper 2 (Th2) cytokines in peripheral blood lymphocytes obtained from Bactrian camels by real-time PCR. The recorded kinetic profiles resulting from the immunization of ovalbumin (OVA) indicated that after immunization, Th2 cytokines including interleukin (IL) families such as IL-4, IL-10, and IL-13 in the camels were up-regulated by a factor of 1.78, 3.15, and 1.22, respectively, which was validated by traditional enzyme-linked immunosorbent assay (ELISA) methods. Unlike ELISA which requires specific enzyme-labeled antibodies, this established method based on the minimal amount of blood samples holds an advantage in the preliminary evaluation of camel humoral immune response with desirable precision, which is meaningful for biomedical explorations of camel-derived antibodies.

Authors and Reviewers
Journal of Biomedical Research is a peer reviewed open access journal dedicated to publishing high-quality research in all areas of the biological and medical sciences. 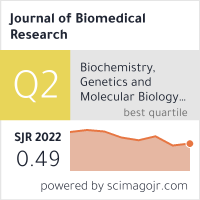